PITTSBURGH (GSM) — Steelers head coach Mike Tomlin acknowledged that injuries are a part of the game. The realization of adjusting for the sudden — and always unexpected — changes in personnel can throw off team chemistry. However, Coach Tomlin has preached the, “next man up” approach on the journey to success as his team continues to heal.

Since the beginning of the 2019 season, the Steelers lost starting quarterback Ben Roethlisberger for the season due to an elbow injury on his throwing arm which required surgery. Starting defensive end Stephon Tuitt is out for the year with a pectoral tear, free safety Sean Davis was put on injured reserve with a shoulder injury, fullback Roosevelt Nix is also on IR with a knee ailment and kick returner/WR Ryan Switzer’s back will keep him from seeing action. Running back James Conner has missed significant time on the field as well when he re-aggravated his shoulder. Most recently, wide receivers JuJu Smith-Schuster and Diontae Johnson in addition to linebacker Ola Adeniyi succumbed to concussions in the game against the Browns last Thursday night, just to name a few. Quite a few, actually.

While the team has seen its fair share of fallen players, Tomlin said in his weekly press conference Tuesday, “I don’t spend a lot of time crying over who’s available or who’s not available. It’s as much a part of the game as blocking or tackling,” Tomlin said. “If you are a competitor — like we as coaches are competitors — that fires you up. You want to smile in the face of adversity.”

The Steelers will play on the road Sunday Nov. 24 against the winless Cincinnati Bengals (0-10), a team that would love to get a win against the Pittsburgh. The Steelers (5-5) are still mathematically alive in the playoff hunt and in 2nd place in the AFC North division.

PITTSBURGH (GSM) — Lining them up and knocking them down.

The Pittsburgh Steelers have won 4 straight and are currently the 6th seed in the playoff race. That’s right, if the playoffs were to start today, the black-n-gold would be in the race for their 7th ring. But it’s only week 11 which means there are more left games to be played.
Speaking of games, the Los Angeles Rams made their way across country to Heinz Field Sunday to face the streaking Steelers and got off to an early start, scoring a defensive touchdown on a high snap that went over the head of quarterback Mason Rudolph. the Rams’ Donta Fowler, Jr. picked up the fumble for a score. Despite the early lead in the 1st quarter, Pittsburgh responded with a touchdown of their own late in the 1st after Rudolph connected with wideout James Washington to even the score to 7-7.
Steelers Safety Minkah Fitzpatrick continues to make clutch plays. He had two takeaways in the game, one fumble recovery for a touchdown — of course as retaliation — helping Pittsburgh rack up a defensive score of their own, and an interception at the end of the game to seal the deal. Fitzpatrick attributes his success to his teammates in addition to referencing his own ball awareness.
Final score was 17-12 in favor of the Steelers and head coach Mike Tomlin praising his defense moments after the win.

“We have been open about that we need turnovers. Great defenses get themselves off the field. Great defenses stand up in the face of adversity when put on a short field. We have worked hard in that area.” Tomlin said, “It starts first with the acquisition of guys that are capable in that area. Can’t say enough about Minkah for example. The tear he is on is what it is; he needs no endorsement from me. But it is also our approach and who we work in the environmental element of our preparation. We just have to keep grinding.

Coach Tomlin says it always takes mental and physical strength to seal the deal. “…today we played, and I thought they played and played to win without fear. When you are playing a good opponent like the L.A. Rams, that is how you have to play. Thankfully, we are able to get a victory.” 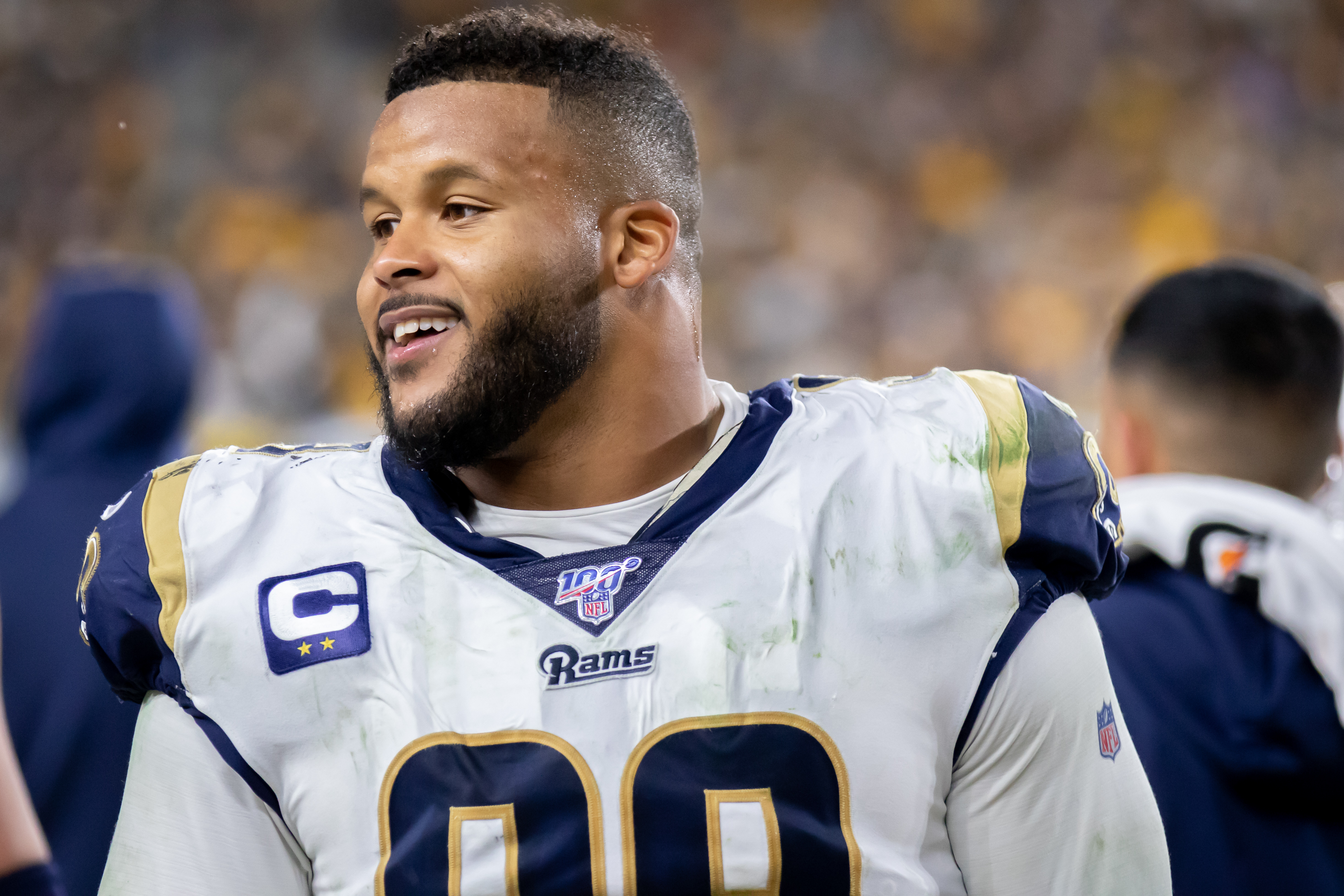 Los Angeles Rams defensive tackle Aaron Donald returned to his hometown Pittsburgh to face the Pittsburgh Steelers on November 10, 2019. (Brian Cook / Golden Sky Media)
On the other side of the ball, former University of Pittsburgh defensive end Aaron Donald, now defensive tackle for the Los Angeles Rams is a native of Pittsburgh. He mentioned how it was a nice homecoming for both he and the people who watched him grow into the player he is today. “This is home. To be back at Heinz Field — where I played 4-years here in college [University of Pittsburgh] —  to be back here performing and to back here at home with my family watching, family and friends, it’s a good feeling.”
Donald was instrumental on defense, recording a half sack along with linebacker Clay Matthews which resulted in a safety. Despite his performance, Donald expressed his disappointment as his team came up short.

“I feel like we played well as a defense. We scored points, made turnovers, and made big stops,” Donald said. “There is always room for improvement, but I felt like overall I was proud of how the defense played today.” – Aaron Donald

The Steelers, however are on a short week and travel to face the Cleveland Browns — for the first of two matchups this season on Thursday night. The Browns defeated the Bills Sunday with a record of 3-6 and are in 3rd place in the AFC North behind the Steelers who are in 2nd with a record of 5-4. The Ravens are currently leading the division — 2 games ahead of Pittsburgh — at 7-2.

PITTSBURGH (GSM) – A scary moment came in the 3rd quarter of the game against the Baltimore Ravens where Steelers quarterback Mason Rudolph was knocked out following a vicious hit by Earl Thomas. The hit  left him unconscious for several minutes and an obvious stoppage of play. Rudolph was able to walk off of the field, woozy and discombobulated.

Head Coach Mike Tomlin addressed the media confirming the aftermath was a concussion.  “I thought he represented himself well. He gave us a chance. You have to tip your hat to him.” Tomlin said. “You are talking about a guy that didn’t make our opening 53 and all those things, we know his story. You also have to acknowledge that he has done some good things at every step along the way through the team development process when given the opportunity and that is why he is in the position that he is in. That is probably why he made the positive showing in spots that he did today.”

The Steelers lost the game 26-23 and travel to the West Coast to face the Chargers on Sunday.

The following video is courtesy of the Pittsburgh Steelers‘ Twitter feed:

Devlin Hodges addresses the media about feeling comfortable coming into the game, Ben Roethlisberger helping him on the sidelines and more. pic.twitter.com/Kw4BoZyaNh

PITTSBURGH (GSM) — The Steelers fell to the New England Patriots Sunday 33-3. However, Head Coach Mike Tomlin — in his weekly press conference — was optimistic about his team’s future.

Rookies Devin Bush (ILB, Michigan) and Diontae Johnson (WR, Toledo) both saw the field at Gillette Stadium. Tomlin said, “It was a quality start to contribute to our efforts.”

Bush racked up 11 tackles (7 solo) and Johnson had 3 catches in their NFL debut.

PITTSBURGH (GSM) — Steelers Head Coach Mike Tomlin, heading into his 13th season, says it was important to, “give the young guys situational work” at Family Day in Heinz Field. Rookies such as Devin Bush (LB, Michigan) and Diontae Johnson (WR, Toledo) received significant reps during the evening’s practice. Johnson left practice with a hip injury. His condition is to be determined in the coming days.