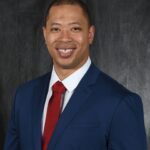 Silas Watkins is a native of Pittsburgh, Pennsylvania.

He began playing hockey at the age of 5 during after school programs organized by his father.

He played Tier 1 inline hockey at Robert Morris University, winning two championships, and has been an active figure in developing hockey in the Pittsburgh area. Silas is now a USA Hockey certified referee and Learn to Play Hockey instructor. Silas currently plays for the Pittsburgh Warriors Hockey Club, a team sponsored by the Pittsburgh Penguins, comprised of all military veterans.

A lifetime lover of hockey and all sports, part of his passion is exposing urban youth to the nuances of hockey considering the fact that Black youth — more than likely — lean toward football and basketball. Silas deems it necessary to ensure kids the opportunity to expand their knowledge base when it comes to sports to make them more well-rounded individuals as he continues to spread his love of the game to urban communities around his city.

A current member of the US Air Force for the last 17 years as a radio frequency technician, Silas is a veteran who has served his country for years and he has dedicated his life and career for the betterment of U.S. citizens. Silas is also a member of Alpha Phi Alpha Fraternity, Incorporated.

He is the son of Charles and Dana Watkins. He is married to Tamara Watkins and the father of a daughter, Noriah.

He currently serves as a hockey analyst for Golden Sky Media, covering the Pittsburgh Penguins and the entire National Hockey League.