PITTSBURGH (GSM) — The rising star on the Steelers’ offense will be sidelined a bit due to a minor injury, Head Coach Mike Tomlin said Friday.

In Friday’s practice, wide receiver Diontae Johnson interacted with teammates and walked the field but didn’t practice. Coach Tomlin didn’t specify the severity of the hip injury he endured or the time he will be out. However, Tomlin mentioned that both Johnson and Terrell Edmunds will miss time. “There are couple of guys that missed today’s work, new guys with minor ailments that can be described as day-to-day.” Tomlin said. “That’s Diontae Johnson and T [Terrell] Edmunds. Hopefully, those guys get back to us really soon. Again, it could be described as day-to-day.”

Johnson is expected to see significant playing time this year. He impressed in his rookie (2019) season racking up 59 receptions, 680 yards and 5 touchdowns. 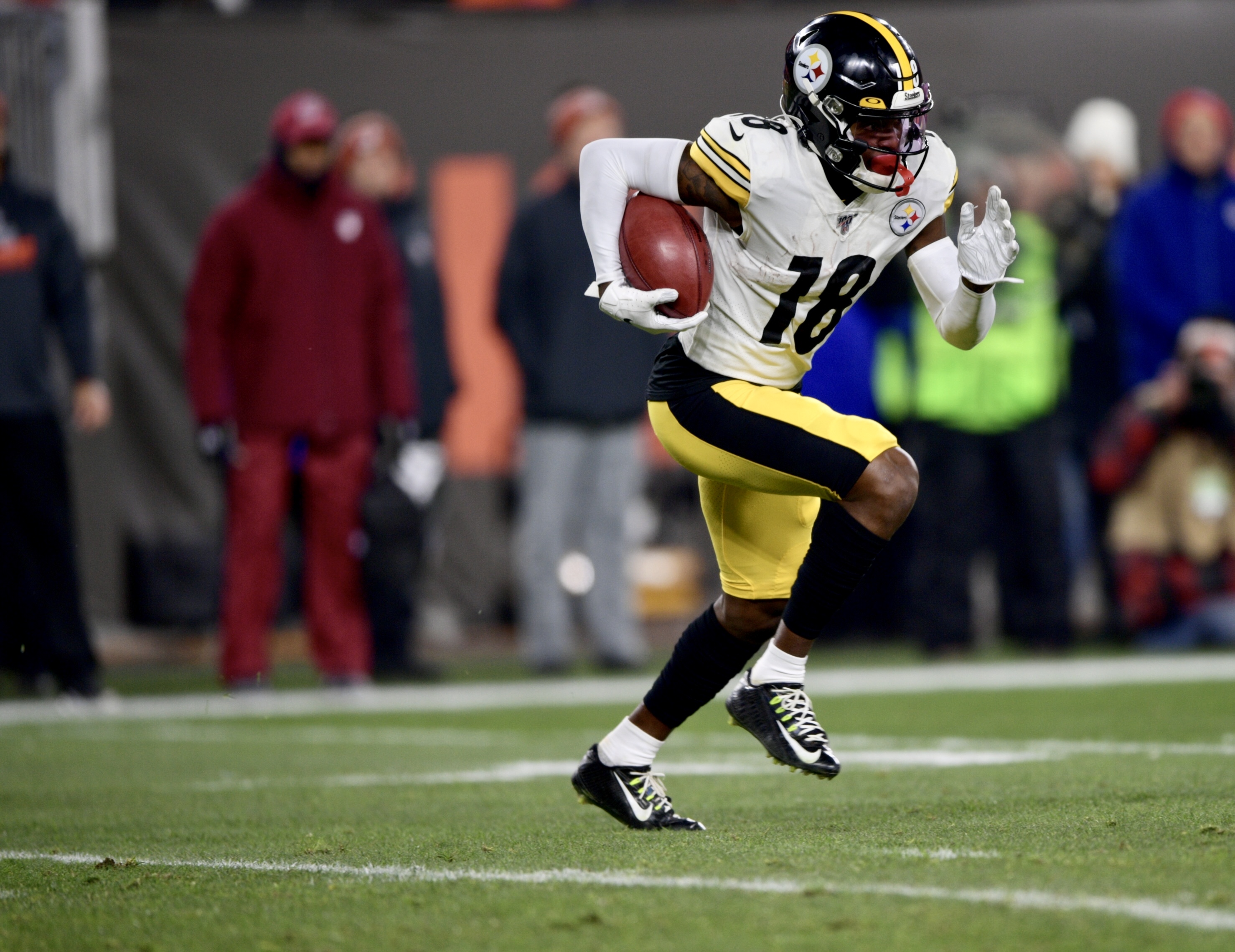 PITTSBURGH (GSM) — Banged up wideouts JuJu Smith-Schuster and Diontae Johnson are added to the list of starters who have temporarily fallen victim to injuries.

In the game against the Cleveland Browns Thursday, both standouts left the game with concussions and as of Monday, were still in concussion protocol. Neither were available for interviews.

JuJu Smith-Schuster left the game after suffering a helmet-to-helmet hit. In the second quarter, 2 defenders, [former Steeler] Morgan Burnett and Greedy Williams made contact with both sides of Smith-Schuster’s helmet, on the same play, leaving him motionless on the field. He was later able to walk off the field on his own.

Want to thank everyone for the thoughts and prayers from the injury last night. I will be ok and can’t wait to get back out on the field with my brothers. pic.twitter.com/SV09EGwr4o

As for Diontae Johnson, Browns safety Damarious Randall lowered his head and collided in the third quarter with Johnson after a helmet-to-helmet hit, leaving him wincing in pain. Johnson started bleeding from his ear shortly thereafter. The hit prompted an immediate ejection of Randall.

Appreciate all the prayers man.. I’m doing good. I’ll be back 🙏🏾

The Steelers announced the signings of two receivers, Quadree Henderson and Amara Darboh, Thursday in addition to additional roster moves.

In a statement from the Steelers:

We have signed WR Quadree Henderson and WR Amara Darboh to our practice squad and released WR Terry Wright and LB Sutton Smith.

We have added RB Ralph Webb to our practice squad.

PITTSBURGH (GSM) — The Steelers have a rising star at wide receiver.

The Steelers have now a new rising star at wide receiver.

There is a new era, as we have all heard at nauseam, related to the void left from the injury to all-pro and future Hall of Fame Quarterback Ben Roethlisberger, the departures of Antonio Brown and running back Le’Veon Bell. There is no debate that there is a difference in the offense, missing this high level of offensive firepower!

In my opinion, there is a glimmer of hope, with the emergence of Dionte Johnson. The former University of Toledo standout has shown he can be a legitimate threat, has great hands, is a solid route runner and possesses game breaking speed. Johnson has 30 catches for 363 yards with 3 touchdowns, the longest being the electrifying catch and run against the Miami Dolphins at Heinz Field.

Johnson is not an Antonio Brown and it is truly unfair to make the comparison. However, Johnson is an outstanding wide receiver, and in this period of transition away from the “Killer B’s” (Antonio Brown, Le’Veon Bell and Ben Roethlisberger), he should be allowed to continue developing and be measured against his own standard, one that, if it continues this trajectory, will be exciting to watch and lethal for any opponent of the Steelers.